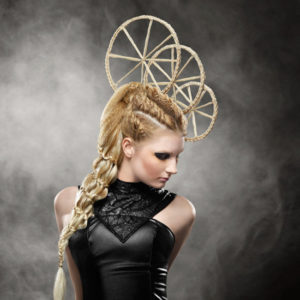 Derived from the name Valkyrie and Iron which is the symbol of industrial Era comes VALKYRON. Valkyrie is a female figure who helps god Odin in a battle by choosing who may die and who may live, symbolic of the strength of Scandinavian women, fused with the feel of industrial era. The word iron is the symbol of Industrial period wherein we withdrew inspiration the gear and chains that were quite symbolic of the first machines invented during this period. The braids are very much Scandinavian as a lot of women there wore braids.

Valkyries are depicted as golden-haired maidens with fair-white arms dressing up such as those warriors at the battlefield. In contrast to their fierce image, they are also known as lovers of heroes. In modern era, the image has altered into elegant and noble women. Meanwhile in the 18th century Industrial Revolution began in Britain. It is an era where there was a shift in terms of way of living from agrarian to industrial and also in the process of manufactory from home-production to massive production using machineries

The new-released look by Makarizo, VALKYRON wraps the charms of the two eras by portraying the alluring strength of maiden Valkyrie in a long golden hair braided with captivating complexity, accompanied with iron-machine-like headdress, resulting in a powerful and smart Haute Couture look.